This course explains & demonstrates the, often misunderstood, concept of modes for the rock guitarist. You will get all the information you need, as well as scale diagrams, jam tracks, demonstration solos containing plenty of usable licks & guitar tabs. Everything is explained in an accessible & relaxed manner, with a minimum of jargon.

John has been playing the guitar since the age of 11. He began his guitar journey on a Woolworths Top 20 guitar, plugged into the mic socket of his Amstrad “music centre” (as stereos were called back then).

Before long he was playing in school bands and started gigging at the tender age of 14. On finishing school he trained as a radio officer for the merchant navy.

Then, after a brief spell working in a test lab for a Japanese electronics company, (whilst plying his trade as a guitarist for hire on the local circuit by night), John “turned professional” as a guitarist in the early 1990s.

Since then he's played in a hugely diverse range of bands, from top-40 covers bands & classic country acts through to alt-rock indie groups & blues bands. He's also carved out a reputation as a session player & sideman for various touring & recording musicians in his native Teesside.

John's influences are varied & include “all the usual suspects” as he puts it, plus a few you may not expect Eric Clapton; Gary Moore; Jeff Beck; Kenny Burrell; Miles Davis; Joe Satriani; Edward Elgar & Chuck Berry to name but a few.

These days, John puts food on the table by teaching a select group of students from his home studio in Redcar, as well as recording his own brand of original, melodic, bluesy rock guitar music, which is available across all major platforms & via his website 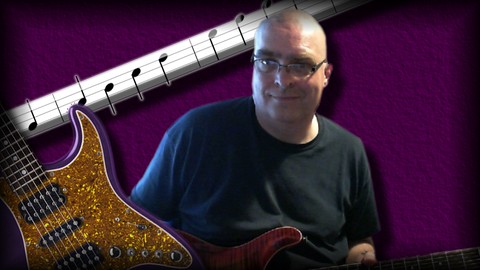