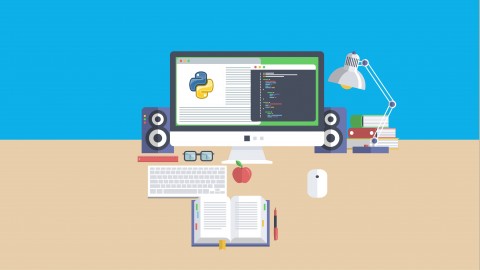 $ 19.99
What will you learn?
Harness the preeminent theories of productivity and time management to squeeze more time out of the day
Use cutting-edge hacks, tips, and tricks to improve computer productivity work
Identify time-wasters and zap them before they drain the day away
Cut out the bad habits that cost hours in the day for no reason
Make more time for the things that matter in life
About the course

Computer Programming is Hard!
Or Is IT?
Learn Python In Under 10 Hours of Video Time
Today I am releasing the SECRETS. This python training course makes learning Python Programming CAKE. No Stiff Professor speaking to you from a carefully typed up script. This course is real relevant and the truth. The everyday person teaching the everyday person. Just like long time friends working together. Beginners will find this python course to be easy to get along with!

We will cover the important stuff with RECORDED Videos and we will work as a team with the Live Streaming Work Sessions!

Program
Intro
What is this Python Course all About ?!?
Is this a baking class???NO...It's Python, the computer programming Language and this is the Course you should take to learn it.This Video tells YOU why!
Getting Starting
How This Course Works
This video will explain how this video should be used to get the best outcome.The course will be divided into two main sections with a source code download section at the end.The first section will teach you the basics of the Python Language while the second section will walk you thru the 5 programs we will be completing.In the second section the process should follow this example:Watch the first video to get an explanation of what the program is all about. Then go on your own to attempt to complete the program using the info this course has provided. After your attempt you should then watch the second video for the instructors solution for the program. He will walk you thru each line of code.This pattern should be followed for all five programs in the second section of the course.If you get stuck on a program there is the source code available for download.
Module 0 - Installing Python

Before you start, you will need Python on your computer, but you may not need to download it.

First of all check that you don't already have Python installed by entering python in a command line window. If you see a response from a Python interpreter it will include a version number in its initial display. Generally any recent version will do, as Python makes every attempt to maintain backwards compatibility.

For advice on choosing between Python 2 and Python 3 see Python 2 or 3.

If you're running Windows: the most stable Windows download (Python 2) is Python 2.7.1 for Windows. For Python 3 it is Python 3.2 for Windows.

If you're running Windows XP: a complete guide to installing ActivePython is at Python on XP: 7 Minutes To "Hello World!". ShowMeDo has two videos for downloading, installing and getting started with Python on a Windows XP machine - this series talks you through the Python, ActivePython and SciPy distributions.

For Red Hat, install the python2 and python2-devel packages.

For Debian or Ubuntu, install the python2.x and python2.x-dev packages.

For Gentoo, install the '=python-2.x' ebuild (you may have to unmask it first).

For other systems, or if you want to install from source, see the general download page.

Udemy courses are suited to professional development. The platform is organized in such a way that it is experts themselves that decide the topic and when the course will start. All supporting documents are made available to you for lifetime access. On this platform, you can find a course on about any subject, and that is no exaggeration – from a tutorial on how to ride a motorcycle, to managing the financial markets. The language and the course format are established by the teacher. This is why it is important to read the information about the course carefully before parting with any money.
Rating
3.9
(1199)
(1234)
(648)
(169)
(89)
Comments (3339)
Similar courses
2020 Complete Python Bootcamp: From Zero to Hero in Python
Udemy
4.6
(314332)
$ 126.99
MOOC
21.5 h
Python Tkinter
Stepik
4.7
(3)
free
MOOC
1 h
Introduction to Portfolio Construction and Analysis with Python
Coursera
free
MOOC
Your message has been sent successfully
Something wrong happened while sending message. Please retry latter
Like any other website, konevy uses «cookies». These cookies are used to store information including visitor's preferences, and the pages on the website that the visitor accessed or visited. The information is used to optimize the users' experience by customizing our web page content based on visitors' browser type and/or other information. For more general information on cookies, please read the «What Are Cookies» article on Cookie Consent website.